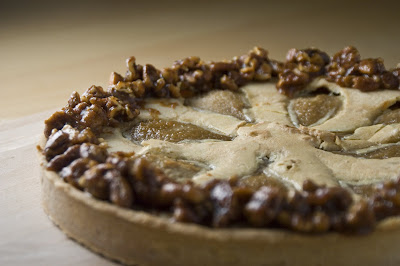 A simple pate sucre filled with a brown butter filling (simple butter browned until it has a hazelnut smell to it, with eggs, sugar a bit of flour and I added a bit more frangelico [hazelnut liquor] to flavor it a smidge). It was alright, I need to figure out how to make the brown butter taste like the flavor I add to it - I really wanted a hazelnut flavor to it, but besides adding roasted ground hazelnuts, I'm not sure how to do it.
Posted by rhid at 10:46 PM 3 comments: 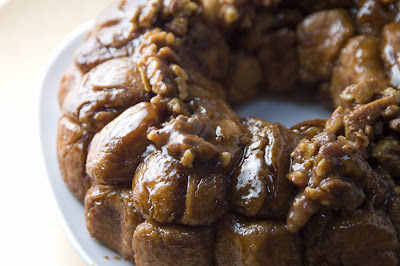 This was seriously tasty. Buttery balls, covered in cinnamon, fused together by caramel. Seriously good. I also added some pecan caramel to the top (I messed up with my caramel which was meant to be a firm caramel candy rather than a goopy mess). This was totally amazing warm. Seriously.
Posted by rhid at 10:42 PM 3 comments: 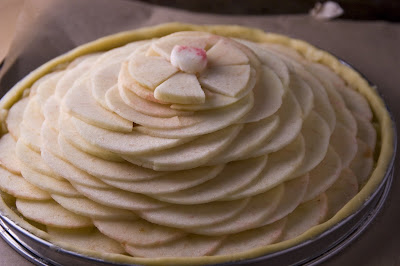 During the week we made some gorgeous puff pastry galletts with a type of apple called Rome Apples. They are a hard batch to get right, they are tasty cooked, not so tasty raw. But the best thing was they had this insanely pink flesh - totally amazing. What is so hard is to find apples that have that pink color in their flesh, as it seems that it's hit or miss - you can't tell from looking at the skin of a Rome what color the flesh will be. However, most of the apples used had a very white flesh with pink veins running throughout the flesh, which at the very least adds interesting color variations.

This tart is the same as a previous post, using Rome apples instead of another. They held their shape, they were beautifully sweet when baked. An apple I'd recommend for baking with. 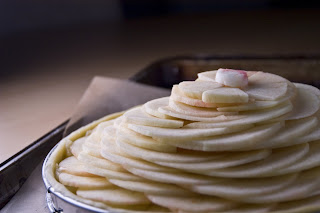 For more info check out: http://www.stemilt.com/fruit/apples/Pages/Rome.aspx
Posted by rhid at 10:29 PM 2 comments: 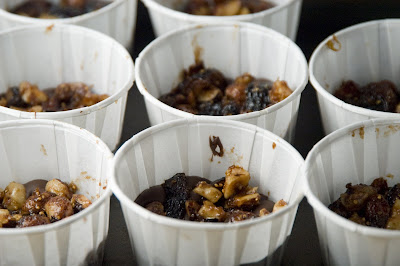 These are from the most recent issue of Bon Appetit (December 2008). I just happen to have all the ingredients hanging about so I thought that I'd give them a go. They were an interesting flavor, sort of chocolately, mulled wine, hazelnutty. Pretty good actually - interesting, pretty easy to make. Great gifts for Chissy! 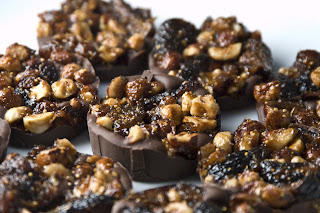 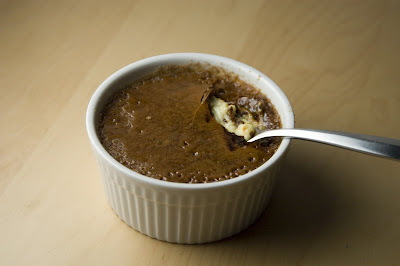 This is my first time attempting to make the iconic dessert that is creme brulee. I have to admit I'm a complete novice, I think I've had creme brulee maybe twice in my life, but those two times I really did like it. I think I was afraid to make it because I didn't have a blowtorch, I really had no idea you could make it using your oven. And so, this is what I did. It was tasty, crazy decadent but pretty damn good.
Posted by rhid at 2:00 PM 9 comments: 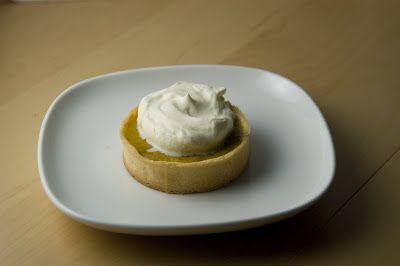 A mentioned in a previous post - I usually have left over pate sucre. I decided to use some the the sucre to make some mini-experimental tarts. I didn't grow up on pumpkin pie, in fact I've never had it before, so I'm not sure what it should taste like. But I was fascinated by the idea of having an essentially savory food inside something that is usually sweet.
For this I simple made some apple sauce out of some amazingly good apples (Johnagold, Golden Delicious and whole bunch of others who's names I've forgotten) added my usual spices (cloves, cinnamon stick and some lemon peel) I put this on the base of the partially baked tart shells.
For the filling, I bought a New Hampshire Pumpkin and roasted it with a bay leaf for around an hour until it was soft. I let it cool and then removed the skin, then I put it in a blender and pureed it. I placed the puree in a sauce pan, added some sugar, maple syrup, some ground down chai tea spices (ginger, orange peel, cloves and cardamon) and cooked it until a bunch of the liquid had evaporated. I mixed in an egg, some milk and some cream then added this on top of the apples. I baked them in a 350F oven for around 20-30 min until they looked well baked.
They were ok. I do like the combo of apples and pumpkin, I just need to work on the pumpkin part - maybe I can add some burn - cayenne pepper perhaps?
Posted by rhid at 3:01 PM 1 comment: 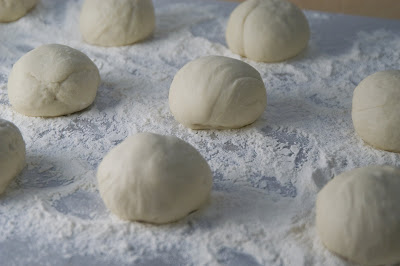 This is one of those recipes I'd been eyeing off for a while, but hadn't yet go around to trying tit. These were doughy (as opposed to bready) rolls infused with onion.
These took a while to make, there was no waiting overnight for the poolish or biga, but as it was a straight dough method, you had to hang around from the very beginning to the very end to give the yeast all the love and attention it desires (it it likes quite a lot).
These were nice. They taste more along the lines of a bagel, chewey, not crunchy. Apparently they were first made by Jewish bakers in Bialystock in Poland. Then some bakers moved to New York, and so the goodness spread! 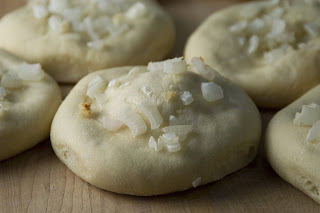 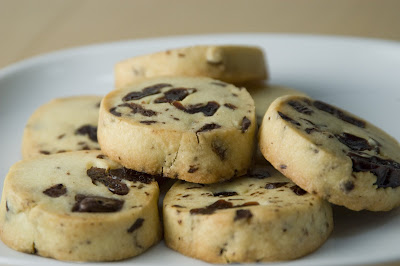 I have a confession to make, I always have left over sucre when I make a tart. Always, so this week I made a concerted effort to reduce my waste in that department. I did make cookies for the past two weeks (seriously 2 weeks of creaming and refrigerating) so I was feeling rather cocky on the cooky front.
These were made with the left over sucre dough, some dried cherries that were hanging about and some bittersweet chocolate that I chopped up. I simply integrated the ingredients into the already warm sucre, rolled it into a log, wrapped it in plastic wrap and then put it in the fridge overnight. The next morning, I unwrapped it, cut it into around 1.5cm rounds, and baked it on a tray lined with baking parchment for around 15min (at 350F).
They were pretty amazing if I do say so myself.
Posted by rhid at 2:10 PM 3 comments: 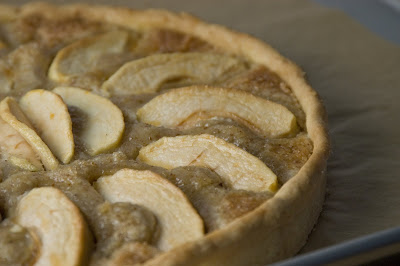 This is such a simple tart to make, especially if you have apples and almonds hanging around. Frangipani is a smooth paste made from almonds (preferably blanched - although as you can see I got lazy and left the skins on half the almonds), sugar and eggs. You can add some flavoring in there in the form of almond extract or vanilla extract, but basically frangipani is sugar, almonds and eggs.
For this tart I simply did my pate sucre (when don't I?) filled it with frangipani, added some peeled, cored and chopped apples and baked until it was a smidge brown, a little puffy and didn't wobble in the middle when I moved it.
A great tart for Autumn.
Posted by rhid at 2:04 PM 1 comment: 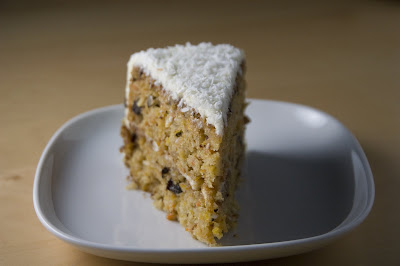 I've made this cake before (http://rhid-baked.blogspot.com/2007/08/carrot-cake.html) but this time I used colored carrots (yellow and orange and a sort of in-between shade). A really nice cake. Moist, nutty and a little spicy. I really like carrot cake due to it's moisture retention. If I were to make this cake again I would maybe times the cream cheese icing recipe by 1.5 as the icing was a little on the skinny side.
School has been full of learning - as it should right? I'm getting rather obsessed with eating local and preferably organic produce since one of our classes is a sustainability class. It's kind of fascinating eating local as you are really restricted to what your local farmers produce, and they in turn are restricted by what consumers eat, what grows up here in the wet North West and what they decide what to grow. There is some amazingly good looking, and better yet - tasting produce out there. Go explore! 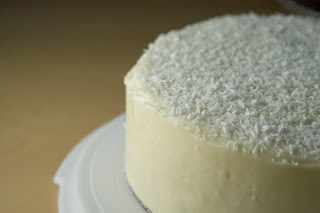 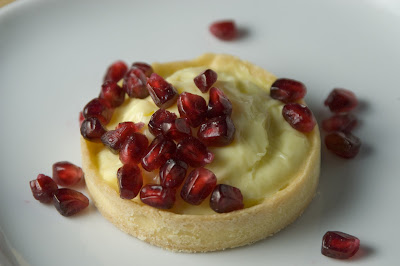 I had some left over pate sucre, and this was meant to enable me to use some utterly gorgeous concord grapes, but needless to say I screwed up. So I decided to make simple custard tarts with some fresh pomegranate seeds as decoration. The custard was flavored with a marzipan liquor we bought in Germany, these worked alright, although they are a tad ugly.
Posted by rhid at 5:21 PM 2 comments: